Fog Crest Vineyard was established in 1998 in the Russian River Valley American Viticultural Area (AVA) of Sonoma County, California. The Estate has a long tradition in agriculture, formerly raising hops and apples. The rolling hills with a south/east exposure provide for both excellent drainage and the full morning sun so necessary for the production of premium wine grapes in the cool Russian River Valley. The vineyard soils are dominated by the Wilson Grove formation, a sandstone ridge that was beachfront property three to five million years ago. This fine-grained, marine sandstone yields the locally famous Goldridge – Sebastopol sandy loam soils long favored by the area’s agricultural community. These influences combine to create a premium wine growing terroir that has made the Russian River Valley famous. The Vineyard was planted with two carefully selected Dijon clones of Chardonnay, and a combination of three Dijon clones and two heritage clones of Pinot Noir. 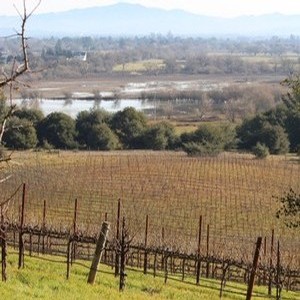 “In west-central Sonoma County, the landscape opens to rolling hills and relatively gentle slopes near Sebastopol. This topography is typical of the Wilson Grove Formation, a fine-grained, shallow marine sandstone that formed in an embayment of the ocean three to five million years ago. It sits on top of Franciscan rocks and can be 1,000 feet thick. Fossil clam shells demonstrate marine origin and show up in wells and outcrops.

“The sandy loam soils of the apple-growing region of Goldridge – Sebastopol form as a direct result of the breakdown of Wilson Grove rock. The low ridge running from Forestville to Sebastopol and south to Cotati is the classic terroir of this association, now being recognized as prime land and climate for Pinot Noir and Chardonnay.

“The most flavorful grapes for Pinot Noir, say Dehlinger and Hedlund, come from Altamont hilltop soils that have 18 inches of silty sand with some pebbles underlain by a red clay layer and then a golden sand below.

“The soil series of the Wilson Grove complex are Goldridge, Altamont (Sebastopol), and Empire.”